Is Anything Truly Original? (or ‘Being Influenced by Another’s Work’)

We are constantly bombarded with images.  Everywhere we go we see posters, adverts, screens, book covers.  It is impossible to avoid them. But do we always remember them?

Psychologists tell us that once something is seen it cannot be unseen.  Somehow that image remains with us forever just waiting to be brought back into conscious memory.  Sometimes we recall the images by choice and sometimes they just ‘pop-up’ in our memories whether they are welcome or not.

I believe in this way we are indirectly influenced by what we see and, as photographers, we use this inspiration to influence our own creative work. 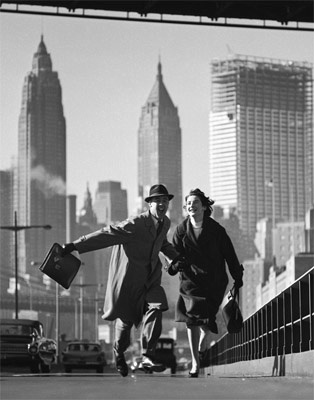 But how far can we take inspiration before it becomes copying?

In a recent case a photographer was sued for breach of copyright for creating an image of a red London bus.  The image depicted an iconic red London bus going over Westminster Bridge with the Houses of Parliament in the background.  The image was predominantly black and white with the bus remaining in red.  It is an image that has been repeated many times.  However, in this case, one company felt that their intellectual property rights had been infringed upon.  The rule of thumb for intellectual property is that the law does not protect ideas, but only the specific expression of those ideas.  So, if someone has already expressed a design concept is it wrong for others to do something similar?

Two years ago I was on a vintage-styled photo shoot in Manchester.  We had already got the shots we wanted but we had some spare time.  I immediately knew what I wanted to do.  In my imagination I saw an image of two people running and holding hands, looking incredibly happy as they ran.  We moved location to Albert Square, set up the shot and got it.  It wasn’t one of the key images of the day but is still one that I look back at fondly.

It was just a few days ago that I suddenly remembered a black and white print that I bought of a photograph by Norman Parkinson.  I loved this image.  In fact, it was the first item I bought for my house when I moved in nearly thirty years ago.  I suddenly remembered the key elements of the image – a couple in 1950s attire running, hand-in-hand, over Brooklyn Bridge in New York, both looking incredibly happy.

It was a moment of realisation that what I thought was my own original idea was actually directly influenced by the Norman Parkinson image, even though I hadn’t looked at the image for twenty years!  Somewhere, somehow a seed had been sewn and that image had lain dormant in my subconscious for many years, just waiting for an opportunity to present itself to draw on that inspiration.

Is anything ever truly original?  You tell me.

Terry McNamara is a Manchester based freelance commercial photographer.  Here you can keep up to date with the projects Terry is working on and whatever he may be currently thinking about.